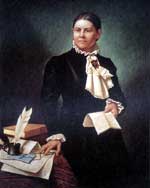 While almost everyone has heard of the historically significant meeting held in 1848 in Seneca Falls, New York, not many people know that just two years later, over 1,000 men and women, black and white, from eleven different states converged on Worcester. They answered an open "Call" to a convention that considered the great question of Women's Rights, Duties, and Relations.

The 1850 Worcester Convention was the only women's rights convention of its day to pass resolutions linking the struggle for racial justice with the struggle for women's rights. Women and men who were leaders at the convention--including Abby Kelley Foster, Lucy Stone, Sojourner Truth, Frederick Douglass, and William Lloyd Garrison--maintained a life-long commitment to both racial and gender equality, even when many in the women's rights movement saw the "color issue" as too divisive for the cause of women' rights.

At the Worcester Convention, a permanent steering committee was formed and resolutions were passed, including one calling for "equality before the law, without distinction of sex or color." Because the Convention showed that there was a national, even an international, constituency for women's rights and that the activists could agree upon a series of practical next steps, contemporaries saw the Worcester Convention as the beginning of the organized women's rights movement.

That is why, in 1870, Elizabeth Cady Stanton and Lucretia Mott called a Twentieth Anniversary Convention in New York City.

This first National Woman's Rights Convention was held at Brinley Hall on Main Street in Worcester. That venue is no longer standing, but join us across the street at Mechanics Hall for a dramatization of the 1850 convention, called Angels and Infidels, written by nationally recognized playwright Louisa Burns Bisogno, and performed by a professional cast.

A Look Behind the Scenes

Abigail Rawson, an attendee of the 1850 convention, is portrayed by Karen Board Moran of Sutton, Massachusetts. Ms. Moran is a Worcester Women's History Project steering committee member and chairwoman of the Reenactment Committee. To aid her teaching at Auburn Middle School in Auburn, Massachusetts, Ms. Moran acts the part of real-life women's rights advocate Abigail Rawson. She used newspaper articles, and other historical data to recreate Rawson and her life as an upper-middle class wife of a Worcester confectioner.

As chairwoman of the Reenactment Committee, Ms. Moran has enlisted nearly fifty women and men to work with her, most of whom have researched the particular attendees whom they will portray in Angels and Infidels and who also have sewn their own costumes to lend authenticity to the entire Women 2000 commemorative weekend.