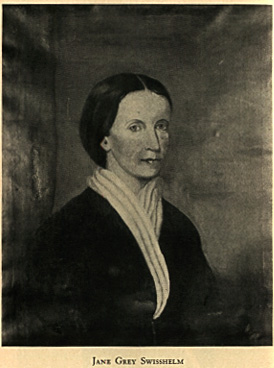 A self-portrait, c. 1836, done when Swisshelm was about twenty-one. Swisshelm married in 1836 and gave up painting and all reading other than the Bible at her husband's insistence.

The first of these rediscovered voices is Jane G. Swisshelm, a pioneer journalist, editor, abolitionist, and woman's rights advocate. In her 1870 History of the woman's rights movement, Paulina Wright Davis hailed Swisshelm: "Early among women journalists Mrs. Jane G. Swisshelm stands out conspicuously. Some time in 1842 or '43 [actually 1848. But her signed journalism began to appear in 1842] she commenced the Pittsburgh Saturday Visitor, which she edited for several years with marked ability. It was the paper most often quoted, and made war upon by all opposers of progress." (P. 28) At a time when many well-known women refused to support woman's rights openly, Swisshelm was one of those willing to attach her name to the "Call" to the 1850 convention.

This mattered because, in 1850, she was one of the most famous, or perhaps notorious, women in the United States. This was not only due to the success of theVisiter, as she insisted on spelling her paper's name, but because of an article she wrote for Horace Greeley's New York Tribune. She was doubling as a Washington correspondent for the Tribune, covering the tumultuous politics surrounding the Compromise of 1850. This measure, which admitted California as a free state and abolished the slave trade in the District of Columbia also included a Fugitive Slave provision which required Northern sheriffs and other officials to cooperate actively in the recapture of escaped slaves. Daniel Webster, long-time Whig Senator from Massachusetts, to the immense disappointment of anti-slavery forces, supported the Compromise. In seeking to account for the decision of the "godlike Daniel," as he was known, Swisshelm accused Webster of siring an illegitimate mulatto family and of being an habitual drunkard to boot. The resulting controversy over the right of the press to pry into the private lives of public figures made her name a household word. [For a brief account which places Swisshelm in the context of the ongoing tension between public officials and the press, click here.]

Swisshelm did not attend the 1850 convention, and -- to judge from Parker Pillsbury's protest of her criticisms reprinted inThe Liberator -- took those who did to task for linking the issues of slavery and woman's rights. Swisshelm wrote: "We are pretty nearly out of patience with the dogged perserverance with which so many of our Reformers persist in their attempt to do everything at once." In her view, "In a Woman''s Rights Convention, the question of color had no right to a hearing." Since Swisshelm was a devoted anti-slavery activist, Pillsbury, a well-known abolitionist, was shocked. He "should not have noticed" such a comment "in most of the public journals" which he "would no more think of having" in his house than he would "of inoculating the family with the foulest leprosy . . . . But yourVisiter finds ready entrance and cheerful greeting."

So began Swisshelm's estrangement from the woman's rights movement she had helped launch. For a taste of her brand of feminism see "Woman's Work And Man's Supremacy." Her account of her disillusionment with the movement is given below in "Bloomers and Woman's Rights Conventions." Her view of how woman's rights advocates should have proceeded is succinctly put in "Many Matters."

The following are from her popular Letters to Country Girls (New York: J.C. Riker,1853):
"Woman's Work And Man's Supremacy"
"Dressmaking and Health"
"Bathing and a Case of Consumption (excerpted)"

Chapters from her autobiography,Half A Century (Chicago: Jansen, McClurg and Company, 1880), 2nd ed.
"Reception of theVisiter" [excerpts from the pen of one of the Visiter's fiercest critics, George Denison Prentice]
"Bloomers and Woman's Rights Conventions"
"Many Matters" (excerpted)