[Editorial Note: Thomas Nast (1840-1902) is often considered America's leading political cartoonist. He is especially known for his withering portraits of William Marcy ("Boss") Tweed and the members of his "Ring" of Tammany Hall politicians who ruled New York City in the late 1860s. Nast is also notorious for his anti-Catholic cartoons which contributed to a renewed wave of anti-immigrant sentiment in the 1870s. Nast's Almanac was very popular and the 1871 volume contained humorist G. P. Webster's poem, "A Dream of the Period" with Nast's illustrations. Together the poem and the drawings say a good deal about conventional notions of gender and gender roles.] 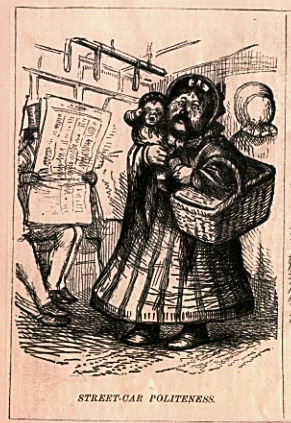 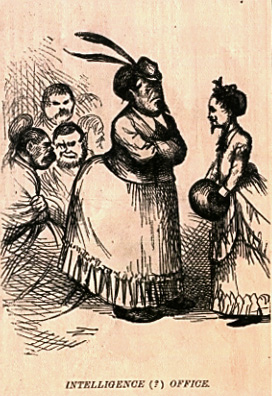 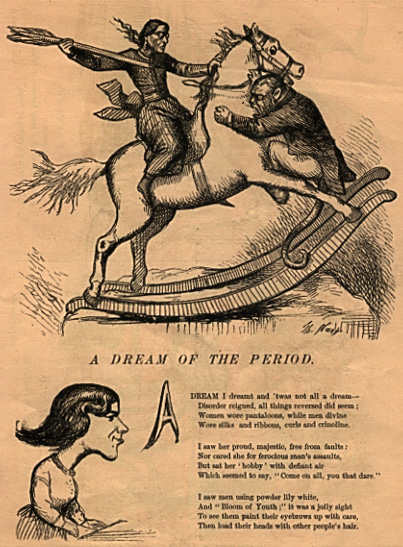 [P.57]A dream I dreamt and 'twas not all a dream--
Disorder reigned, all things reversed did seem;
Women wore pantaloons, while men divine
Wore silks and ribbons, curls and crinoline.

I saw her proud, majestic, free from faults;
Nor cared she for ferocious man's assaults,
But sat her 'hobby' with defiant air
Which seemed to say, "Come on all, you that dare."

I saw men using powder lily white,
And "Bloom of Youth;" it was a jolly sight
To see them paint their eyebrows up with care,
Then load their heads with other people's hair. 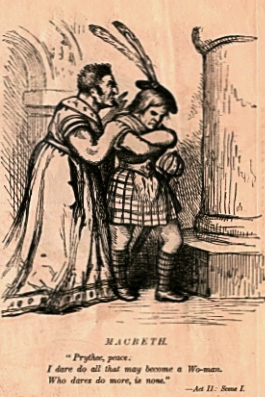 [P.59]I saw a cruel husband instigating
His wife to bloody deeds, she hesitating--
Just as that proud and bloody man, Macbeth,
Drove his poor wife to murder and to death. 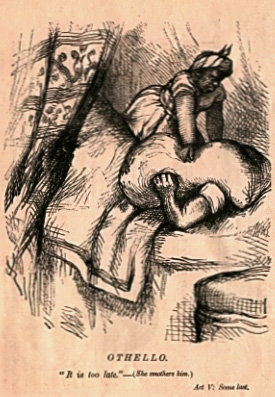 Othello killed his wife! Oh, no good fellow!
'Twas cruel Desdemona killed Othello--
Married him first and took him from his mother,
And then her gentle husband she did smother. 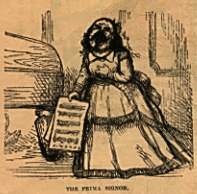 A spirit whispered, "Let your heart rejoice
In man's soft melody." His tuneful voice
Yields sweeter strains and softer to the ear
Than blue birds' notes, when blooming spring is near.

My neighbor Jones seemed happy for his wife--
Called him her pet, the comfort of her life,
And passed the time in coaxing and carressing [sic];
Oh, happy Jones, his wife was such a blessing!

Alone and sorrowful, day after day,
At home, I passed my time, my wife away--
Made business all her care, while, weeping, I
Was left alone to suffer and to sigh.

I mildly said, "My dear come early home;
I fear, my love, you are inclined to roam.
What kept you out last night?" She answered , "Bah!"
I stopped a moment at the opera.

And Jewett, Wright, and Kennedy were there,
Worn down by toil; it is no more than fair
That we should have a little recreation!
Now, don't get mad and call it dissipation. 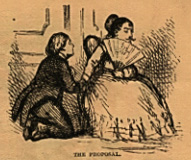 I saw a woman to her loved one kneeling,
Telling her love, and to his heart appealing;
He blushed, and answered "No," and then relenting,
Smiled, sighed, and answered Yes," at last consenting.

My wife went to the club, and took delight
In the "Sorosis" there, night after night;
She gave her time to feasting and to drinking,
Of her poor lonely husband never thinking. 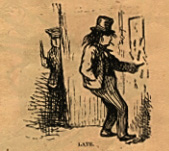 And still I dreamed--imagine what my feeling,
When home, long after midnight, she came reeling,
And swore and grumbled while the door unlocking,
And roused the neighbors by her noisy knocking.

Roused by her rappings loud and furious ringing--
Bewildered, drowsy, sick, I heard her singing,
And cried, "Oh, stop!" and then she did upbraid me,
And said she only meant to serenade me. 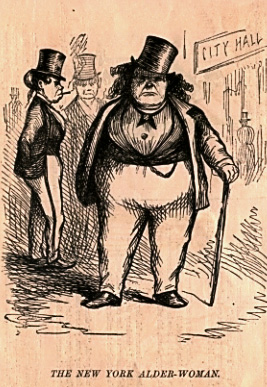 Affairs of state seemed greatly to depress her;
The wrongs of women too did much distress her.
Said she, "You only have the grief you borrow,
While I must share a suffering people's sorrow." 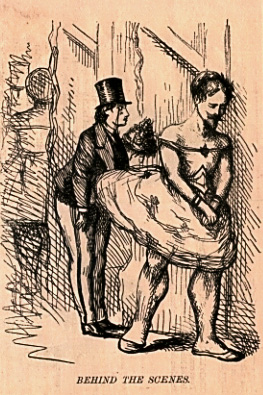 [P.61]I saw a man in garments light and airy,
With step fantastic, graceful as a fairy;
And wicked misses followed everywhere,
And pained and shocked him with their brazen stare.

Some men the wrongs of women did deplore,
Demanding equal rights for them, and more--
Made them the burden of their daily song,
But never dreamed that man could have a wrong.

And still my brain with fancies strange was teeming,
Not real--oh no! for I was only dreaming;
Man helpless seemed, while women played their pranks,
Rode, raced, talked politics, and set up banks.

I tried my very best my wife to please;
But still, a button gone from her chemise,
A garment torn, or hole in an old stocking,
And she would scold me in a manner shocking.

I told her how our little girl lay groaning
By fever parched, of our poor babe moaning
Upon my lap--how tired I was of nursing!
When she, excited, did some awful cursing.

She called me a tormentor, most provoking--
Fretful and discontented, always croaking;
Said cruel things to harass and to grieve me,
Then took her hat, and swore that she would leave me.

Michael, the cook, was impudent; while Terry,
The babe, neglected, passed his time with Jerry,
The chamberboy, and I was so tormented;
And yet my wife would bid me be contented.

A trotting horse she kept--could row a boat
In Oxford style, and had the right to vote;
Talked much of justice, law, and common sense,
And understood the art of self-defence.

My wife was always present at the races;
Gazed at the men, admired their pretty faces;
Bet freely on her nag, and always lost
Drank, smoked, and never stayed to count the cost. 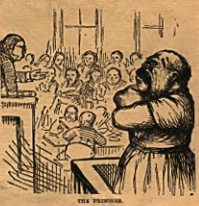 I though I heard an earnest woman pleading
For a poor, weeping prisoner interceding--
Demanding, too, in tones loud and defiant,
Mercy for her poor, weak, and trembling client.

Guilty! Not so, she said, his face doth plead,
And in it simple innocence we read;
Pure loving thoughts are stamped in every feature--
Fie, woman, why pursue the gentle creature. 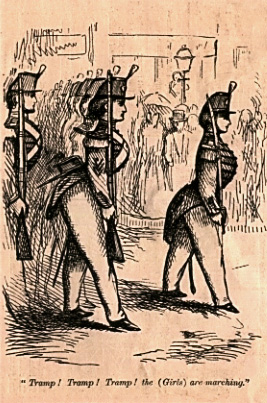 The bugle-call her martial spirit rouses;
In padded coat and military trousers
She passed the day in drilling, marching, firing,
While men looked on half frightened, half admiring. 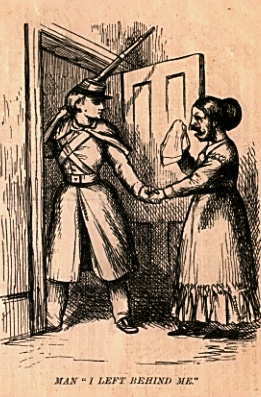 When drums and trumpets summoned her to duty,
She turned her back on home, and love, and beauty;
"Husband," she said, "now prove yourself a true man;"
Then she marched out to fight just like a woman.

Man stayed at home, in spite of all his cares
He still found time for sanitary fairs,
And sighed, "I'm lonely now! come back, my rover;"
Said Echo, "When this cruel war is over." 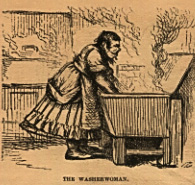 [P.63]Man should be chaste, and quiet, and industrious;
Woman majestic, powerful, and illustrious.
Contentment is the gem that proves the true man,
While strength and dignity become a woman. 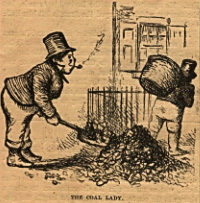 Men are not strong, and toil seems made for woman;
Man can not share it; no, 'tis deemed inhuman.
Charmed by his sweet angelic disposition,
They guard him from wrong and imposition.

Jane had a college chum, and loved her brother,
She wooed him, and he bade her ask his mother;
Jane had good sense, was free from all frivolity'
Besides, she had some gold--a shining quality.

Jane called, the mother stared, and then inquired
(As though she did not know) what she desired;
"I love your son," she answered, "and would marry."
"Go do it then," said she, "and do not tarry."

I dreamt that man had wrongs, that servants' vexing,
Annoyed him, were in many ways perplexing;
And when he sought a face that looked docility,
He found vile impudence and incivility. 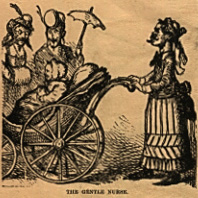 "Woman," I said, "Leave off cigars and cursing;
Look at your gentle husbands, see them nursing
Your little babes, still uncomplaining, meek,
And they so fragile, and so weak." 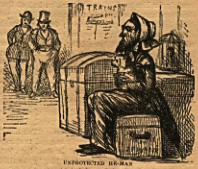 The train had left; I saw a man belated,
And all alone the timid creature waited;
While well-dressed misses, impudent and daring,
Alarmed him by their naughty looks and staring.

A prophet then appeared (not one of old),
And strange reforms and fashions he foretold
These things shall come to pass--'twas thus he spoke
In tones so loud, and, wondering, I awoke. G.P. Webster